The Kindness of Strangers

One summer when I was a student, my girlfriend and I were hitch-hiking through Italy. We found ourselves sitting in a cafe in Rome, feeling rather tired and bedraggled.  A woman at the next table leant across, said she was worried about how we were managing, and gave me a 50,000 lira note (worth about £20, a lot of money for students in those days).
A random act of kindness.
Why on earth did she do that?  She didn’t know us, had never met us before, and would never see us again.  How odd!
There’s an obvious point in being kind to family and friends, because we care about them. There’s an obvious point in being kind to people we work with: it encourages colleagues to work harder, and makes our clients more satisfied.
But why are we kind to people we don’t know, and have no particular contact with? 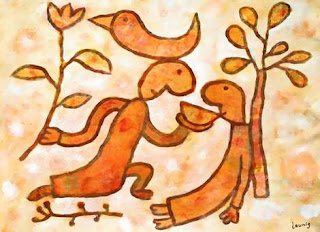 The writer Anne Herbert tells us to ‘practice random acts of kindness and senseless acts of beauty’, which sounds wonderful - but she doesn’t tell us why.
Kindness to others is a big element of the major religions. It’s zakat, the fourth pillar of Islam; it’s central to Buddhism; and ‘loving your neighbour as yourself’ is at the heart of Christianity.
But that doesn’t explain random acts of kindness by people who live without a faith.
Being kind to strangers is strange!
I ask Sue - the kindest person I know - why she is kind to strangers. Her immediate response is ‘Well, what goes around comes around’.  I know that’s one reason she enjoys offering house room for couch-surfers: the thought that people in Mexico, Australia or wherever will do the same for our children when they’re travelling around the world. It’s reciprocity, on a global scale.
Then she says, ‘Being kind doesn’t take extra energy’. It doesn’t cost anything to give someone a hug - although I suppose you might get a smack in the face if your hugging is just too random. She points me towards the Gentle Art of Blessing, by Pierre Praverand: all about wishing unrestricted good for others.  You can find a glimpse of Pierre’s words on  www.youtube.com/watch?v=WegAgepCYfo
She also tells me she’s read something about the hormone oxytocin, so I do some googling. It turns out that acts of kindness are often associated with emotional warmth, which produces oxytocin. Oxytocin helps to reduce blood pressure, and so protects our hearts. It may also reduce free radicals, and slow the ageing process.  So maybe being kind to others is good for our health, our well-becoming.  Interesting.
‘What goes around comes around.’  That certainly makes sense to me.
A few years ago I was sitting on a beach in southern Spain with one of my children. It had been raining non-stop for the past week, and when the sun finally came out we wanted to enjoy it. A young couple struggled past us, looking tired and bedraggled.  They were setting up camp at the far end of the beach, but all their kit was soaked.  After watching them for a while, I went over to say hello, and told them about the woman in the cafe in Rome. I gave them a 50 euro note, explaining how I was just passing the money on.  Maybe they will do the same, twenty years from now.
Why do you think we are kind to strangers?
What is the kindest thing a stranger has done for you?
What is the kindest thing you’ve done for a stranger?
Posted by Unknown at 13:44